A Week in the Amalfi Coast, Capri & Rome!

Explore the storied history and cultural treasures of the Vatican, as well as Rome's Imperial and Renaissance treasures – including magnificent St. Peter's and Tauck's exclusive after-hours guided visit to the Vatican Museums and the Sistine Chapel! Balance architectural landmarks with the natural beauty of the Isle of Capri's rugged coastline, and the seaside villages and cliffs found along the Amalfi Coast. Discoveries include a tour of the archaeological site of Herculaneum – preserved under volcanic ash for nearly 2,000 years – and sightseeing via convertible car on Capri. Travel by high-speed ferry and high-speed train, enjoy an exclusive lecture on contemporary Italian society, and catch the views from glorious private villas on Tauck's southern Italy tours to the Amalfi Coast, Capri & Rome.
Request a Quote
Hide Form 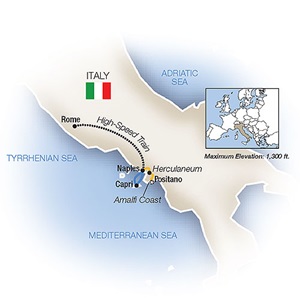 We love this inclusive 8-day tour from Tauck which allows you to explore the ruins of Herculaneum, seaside villages of the Amalfi Coast, the alluring isle of Capri, and the treasures of ancient and Renaissance Rome…highlighted by a locally guided visit through the Vatican Museums and Sistine Chapel – after hours – on Tauck’s southern Italy tours.  See below all of what is included in this journey such as your Tauck guide, hotel accommodations, transportation, many meals, entertainment and more!

Tauck’s southern Italy tours begin at 6:00 PM at Le Agavi Hotel, Positano. A transfer is included from Naples Airport to Le Agavi Hotel in Positano, built into a cliff overlooking the bay.

The Amalfi Coast & a taste of Italy in Ravello

Drive along the Amalfi Coast, one of Europe’s most dramatic shorelines. See the brightly colored houses set on towering cliffs above the sea, and the houses in the town of Amalfi built between the 10th and 13th centuries.

Herculaneum & a ferry ride to the Isle of Capri

Begin the day with a guided tour of the archaeological site of Herculaneum, an affluent Roman resort town that was buried in volcanic ash by the same eruption of Mount Vesuvius that destroyed the nearby city of Pompeii in 79 AD.

You’ll really feel like a jet setter today when you explore the history and natural attractions of the Isle of Capri in a convertible car. Visit the town of Anacapri, then beautiful Villa San Michele, built in the late 19th century atop Roman palace.

Via Naples to Rome & the Vatican Museums

Depart Capri by high-speed ferryboat this morning to Naples – capital of the Campania region and one of Italy’s most important cities. Then first-class accommodations aboard a high-speed train whisk you from Naples to Rome.

Rome’s piazzas & the city as you please

Today’s city sightseeing begins with a guided walking tour of Rome’s magnificent piazzas – including the Piazza di Spagna, the Piazza del Pantheon and the Piazza Navona, featuring the famous Fontana dei Quattro Fiumi (Fountain of the Four Rivers), and more.

St. Peter’s & more of Rome on your own

Start the day in Rome’s magnificent St. Peter’s Square, designed in the seventeenth century by Bernini in a perfectly symmetrical, elliptical design. Then see more of this gifted sculptor and architect’s extraordinary work when you go inside.

Perched on a cliff overlooking the blue Mediterranean, the terraced Le Agavi Hotel a Positano offers astounding views of the Amalfi Coast. Pleasant guest rooms have balconies overlooking the sea. The swimming pool is another fine place from which to admire the striking Amalfi Coast, as is the Bar Hall Terrace with its sweeping vistas.

A member of The Leading Hotels of the World, the Grand Hotel Quisisana is set amidst lovely formal gardens near the Piazza Umberto. Guests are invited to take advantage of both indoor and outdoor swimming pools, as well as the gym and tennis courts. The “QuisiBeauty,” offers a range of body treatments. The Quisi Bar and Terrazza is a popular place for an aperitif or after-dinner drink enhanced by world-class people-watching opportunities, as it is a favorite of many of the celebrities who return to the Grand Hotel Quisisana year after year. The sophisticated readers of both Travel + Leisure and Condé Nast Traveler consider this to be one of the best hotels in world.

A jewel of neoclassic elegance built in 1889, Hotel Majestic Roma is set on the renowned Via Veneto within walking distance of the Spanish Steps and the Villa Borghese Gardens. This intriguing hotel was constructed in the shape of a piano to accommodate a bend in the Via Veneto; its distinctive antiques and fresco-adorned ceilings make it a special place to stay. Welcoming guest rooms, with their unique combinations of fabrics used for drapes and bedspreads, feature air conditioning, direct dial phone, satellite and cable TV channels, hair dryer, safe, mini-bar and Carrara marble bathroom. The Fitness Center, available to guests 24-hours a day, is equipped with the latest in exercise equipment. An on-site restaurant offering local Roman and Italian dishes and cocktails on the terrace in a cozy, informal atmosphere, is one of Rome’s best-kept secrets. A part of the scenery in Fellini’s La Dolce Vita, it has long been a favorite choice of royalty and celebrities.

Price is per person, based on availability and subject to change at any time. Tour prices are per person in U.S. dollars. All hotel accommodations, motor coach transportation, First Class accommodations on a high-speed train from Naples to Rome, entertainment, special dinners, sightseeing, admissions, porterage and the services of the Tauck Director, local guides and drivers are included. Transportation from Naples Airport or Central Train Station to the Hotel Le Agavi in Positano is included, regardless of the time you check in to the hotel, provided you have furnished us with accurate flight information at least three weeks prior to the start of the tour. Transportation from the Hotel Majestic Roma to Leonardo da Vinci Airport at Fiumicino or a local train station is also included when you check out of the hotel. Transportation to and from airports and train stations may be shared with other Tauck guests.