Unlock the mysteries of the Baltics on this 9-day cruise. See the Tivoli Gardens, Amalienborg Palace and other Copenhagen landmarks on a guided tour. Step into a realm of wonder in The Hermitage Museum – one of the world’s most prestigious museums – as you discover the splendors of St. Petersburg. Stand in the same hall as Nobel Prize recipients while touring Stockholm’s City Hall with its beautiful murals and architecture and then head to the Island of Djurgarden that’s considered the city’s outdoor recreation center. From history to the arts, much awaits your discovery in the Baltics. 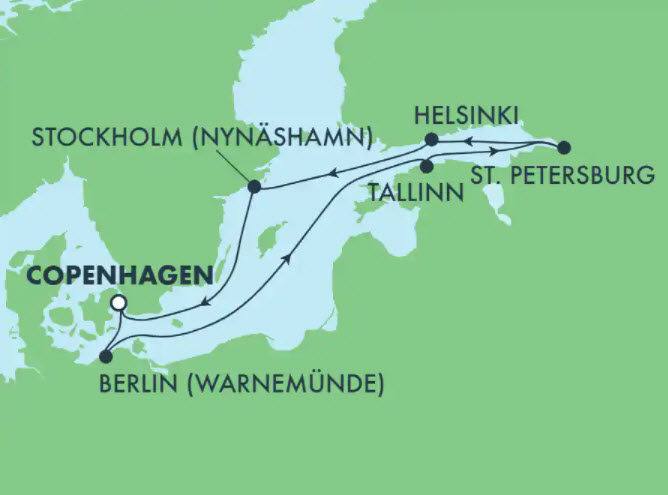 Book by August 31, 2021 and save 30% off cruise fare, PLUS receive Free Air (second guest flies for free), Unlimited Beverages, Specialty Dining, Internet package, Shore Excursion credit and 3rd/4th guest sails for only $99. EXCLUSIVE BONUS - receive up to $300 Onboard Credit per stateroom when you book with us!

The capital of Denmark, Copenhagen, is filled with canals, cobbled squares and copper spires.  Certainly you can relive medieval times in The Latin Quarter, but you can also enjoy some of Europe’s finest shopping, museums, cafes and nightlife prior to your cruise around the Baltics.

Germany’s capital city of Berlin is a city that balances cosmopolitan chic with a liberal undercurrent of creativity and cool. Famous landmarks like the Brandenburg Gate and Reichstag fascinate.

The capital of Estonia impresses cruise guests with its mix of medieval houses and very modern boutiques and café culture. Journey inside the ancient walls of Old Town to explore stunning Medieval landmarks like Toompea Castle and a 15th Century apothecary shop.

Enjoy an overnight in St. Petersburg, the cultural center of Russia, with its spectacular architecture, Tchaikovsky operas, and the famous Kirov ballet. It has undergone many changes over the decades, but “The Venice of the North” remains a dazzling cruise destination, a Russian city with a European flair, a city with more than 200 museums, and one of the largest English gardens in Europe!

Welcome to Scandinavia’s “White City of the North,” a city defined more by its people and Art Nouveau architecture than its chilly climate (from October to April). Helsinki is a classic sea-city, with a dramatic coastline colored by bays and inlets.

Laced by an ingenious network of waterways and bridges strung between a freshwater lake and the sea, Stockholm is easily seen on foot or by waterway cruise. Its gabled old townhouses peer over cobblestone streets, while its magnificent 17th-century palace sits watching over the harbor.

Norwegian Getaway combines the most magnificent amenities Norwegian has to offer with unforgettable destinations. Stroll The Waterfront, an innovative, industry-first open-air promenade designed to connect guests with the ocean like no other cruise line. Indulge in 20 dining options, experience the thrill of five water slides, and three levels of action-packed activities in the sports complex. The excitement and entertainment continues with Broadway musical Million Dollar Quartet. Get ready to explore the white sand beaches and deep-blue waters on a Bahamas or Caribbean cruise, build a pink sandcastle in Bermuda, explore history up close in Europe, or just relax at sea on a Transatlantic cruise. Miami’s Ultimate Ship is your ultimate getaway.

Prices are per person based on double occupancy, availability and subject to change without notice. Taxes, fees and port expenses are additional at approximately $189.44 per person. The air promotion is capacity controlled and from select gateways. All above promotions may not be combinable. All promotions are based on double occupancy. Other restrictions may apply. Ship’s registry: Bahamas