Visit Iceland, Norway & the Northern Isles on One Cruise!

Immerse yourself in the beauty of coastal Norway, visit Haugesund's thriving town center and enjoy scenic cruising along the snow-capped mountains of Geiranger Fjord. While in Bergen, explore the iconic cluster of 62 buildings built in the style of Hanseatic League’s trading era. Then, sail to Iceland where world-famous landmarks await you. Take a dip in the Blue Lagoon while in Reykjavik, or visit the “Waterfall of the Gods’ on your way to Námaskarð Pass. Between the rugged terrains and the concrete Viking history, these mesmerizing lands echo the promise of adventure. 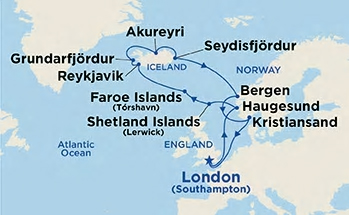 3 For Free! Book by Oct. 31 and receive Free Pre-paid Gratuities, Free Stateroom Location Upgrade, and Free Onboard Credit up to $800! Plus you'll get a reduced 10% per person Cruise Fare Deposit! Finally, you'll get our exclusive extra $60 Onboard Credit per stateroom

Haugesund, Norway:
This quaint town perched on the North Sea boasts dual personalities. While renowned as the site where Viking king Harald Hårfagre united Norway as a kingdom in the 9th century, it’s also one of the country’s most popular destinations for the annual Sildajazz Festival and Norwegian Film Festival. Add in a thriving town center with hundreds of shops and cultural diversions to jaw-dropping scenery and thrilling excursions, your stay in Haugesund promises to be an enthralling experience you won’t soon forget.

Shetland Islands (Lerwick), Scotland:
The Shetlands are the most northerly of the British Isles and consist of over one hundred islands, of which a mere 16 are inhabited. Lerwick is the capital of the archipelago. Located on the eastern shore of Mainland, the largest Shetland Island, the town was largely developed by Dutch herring fisherman in the 17th century. The islands are renowned for their superb crafts ranging from woolen and cashmere knitwear to intricate lace shawls and fine jewelry.

Faroe Islands, Denmark:
The unspoiled Faeroe Islands lie far off the beaten track in the North Atlantic. Discovered by Irish hermits in the 8th century AD, the 18 islands were settled by Vikings 100 years later. While Faeroes means “Sheep Islands,” the people of these weather-beaten rocks have always turned to the sea for sustenance. Tórshavn, with a population of about 15,000 souls, is the capital of the archipelago.

Reykjavik, Iceland:
Iceland is a land of volcanoes and glaciers, lava fields and green pastures, boiling thermal springs and ice-cold rivers teeming with salmon. This unspoiled demi-paradise is also home to a very old and sophisticated culture. The northernmost capital in the world, Reykjavik, Iceland is an international center of commerce and home to one of the most technologically sophisticated societies in the world.
Reykjavik is the gateway to Iceland’s natural wonders, which range from ice fields to thermal pools.

Grundarfjordur, Iceland:
Sailing into Grundarfjordur, one travels into Iceland’s heroic past, for this township – village really – is one of the oldest settlements on the island. The imposing landscape with its austere mountains, volcanoes and lava fields provided the dramatic setting for one of Iceland’s cultural treasures, the sagas. Much of the Snæfellsnes Peninsula is a national park. The park’s centerpiece is the mighty Snæfellsjokull, an imposing stratovolcano with flanks buried beneath a glacial flow. The mountain is a frequent setting in Icelandic myth. The peninsula is also a birdwatcher’s paradise.

Akureyri, Iceland:
The town is your gateway to the famous “Land of Fire and Ice” – Iceland’s dramatic landscape of volcanic craters, extinct lava lakes and majestic waterfalls. Visitors to Akureyri have a hard time grasping the fact that the town lies just below the Arctic Circle. The climate here is temperate: flower boxes fill the windows of houses, and trees line the neat, well-tended avenues. Thanks to that mild climate, Akureyri’s Botanical Gardens provide a home for over 2,000 species of flora from around the world – all surviving without greenhouses.

Seydisfjordur, Iceland:
Considered the cultural capital of Eastern Iceland, Seydisfjordur lies at the head of a narrow fjord flanked by high mountains. This town of some 700 souls achieved municipal status in 1895, the first town in the East of Iceland to do so. The city is also the terminus for the ferry service linking Iceland to the Faeroe Islands and Denmark. Seydisfjordur is your gateway to the wild and isolated scenery of the Eastern Fjords. Seydisfjordur boasts a wealth of well-preserved 19th century homes and buildings. In the summer the small town can take on a cosmopolitan air as visitors flock to town aboard the ferry.

Bergen, Norway:
Perched between the sea and seven hills, Bergen has witnessed Vikings setting sail on voyages of exploration, trade and war. The city retains much of its 18th- and 19th-century charm. Visitors to Bergen will encounter a city that offers a heady blend of natural beauty, history and culture.

Kristiansand, Norway:
Norway’s fifth largest city was founded by Christian IV in the year 1641 as a market town and administrative center on Norway’s then-strategic southern coast. The city is separated from Denmark by the Skagerrak, the long strait that connects the Baltic and North Seas. Today the capital of the Aust-Agder region is one of Norway’s most popular vacation destinations: the city and the surrounding countryside boast the sunniest summer weather in Norway.

A floating retreat, bound for destinations from the California Coast to the Great Land and beyond

Island Princess is your own private retreat on the sea. Whether you crave relaxation or exhilaration, you’ll find the soothing Lotus Spa®, live entertainment, gourmet cuisine, casino gaming and more. And for a special treat, try the Bayou Café and Steakhouse, which features New Orleans-inspired Cajun and Creole cuisine.

Indulge your appetite whenever you wish on board Princess®. Every hour, our chefs are busy baking, grilling and sautéing great-tasting fare from scratch. Princess offers unparalleled inclusive dining options throughout the ship with a wide range of culinary delights to suit any palate, from endless buffet choice to gourmet pizza, frosty treats, decadent desserts and much more.

Dining on board a Princess® cruise ship is a joyful celebration and our specialty restaurants always deliver an extraordinary experience. They are among the best at sea – or anywhere. We serve dishes made with the freshest ingredients, and our menus reflect regional flavors from around the world. You’ll find our specialty restaurants are the perfect place to celebrate any occasion.

On every Princess ship, you’ll find so many ways to play, day or night. Explore The Shops of Princess, celebrate cultures at our Festivals of the World or learn a new talent — our onboard activities will keep you engaged every moment of your cruise vacation.

Original musicals, dazzling magic shows, feature films, top comedians and nightclubs that get your feet movin’ and groovin’. There’s something happening around every corner; luckily, you have a whole cruise of days and nights to experience it all.

Prices are per person based on double occupancy, availability and subject to change without notice. Taxes, fees and port expenses are additional at approximately $225 per person. Fares above may include the FREE OBC up to $800 or the $60 OBC per cabin depending on availability. Some fares above have a non-refundable deposit. Other restrictions may apply. Ships registry: British and Bermudan