Depart Copenhagen, visit Norway, then cruise around Iceland with a stop in Reykjavik, before seeing historic Scotland on the return trip to Copenhagen. When you book this fascinating cruise with Cruise & Travel Experts, receive extra bonuses such as $50 Onboard Credit per couple, Prepaid gratuities, 50% Reduced Deposit and a Bottle of Sparkling Wine. 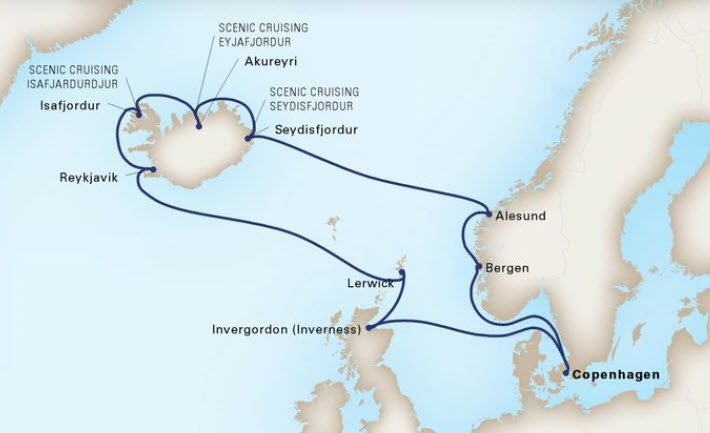 Laid-back and effortlessly cool, the world’s most northerly capital is like nowhere else on earth. With geothermal water pumping through its veins and a staggering backdrop of gnarly lava fields, majestic glaciers and rainbow-colored houses, Reykjavík is famous for its natural wonders and dramatic scenery. But what is less well known is that the diminutive Icelandic city has cultural offerings to rival many destinations twice its size. Explore the world-class museums and art galleries during the day, then while away the evening hours in cozy cafés and bars. A thriving food scene showcases traditional Nordic cuisine, as well as modern and international trends, and the city’s creative output is in high gear with internationally acclaimed designers, musicians and artists. Self-confident but not cocky, this city is truly one-of-a-kind.

First of our Vista-class ships, Zuiderdam boasts classic nautical lines and finishes, modern amenities and a spectacular art and antique collection. While on board, explore the world’s wonders through BBC Earth Experiences. Hone your culinary skills at a cooking show or hands-on workshop with America’s Test Kitchen. Relax with a rejuvenating treatment at the Greenhouse Spa & Salon. Enjoy the wide array of delectable cuisines in our restaurants.

Price is per person based on double occupancy, availability and subject to change without notice. Taxes, fees and port expenses are additional at approximately $284 per person. Promotion does not apply to third/fourth berth guests. Free or reduced fares for 3rd/4th guest area based on sharing a stateroom with the first and second guests and are valid only on select sailings. Prepaid gratuities are for 1st and 2nd guests in cabin only and cannot be used for bar, dining room win accounts or spa/salon services. Reduced deposit is valid for new bookings only. Promotion ends 5/14/19. Other restrictions apply. Ships registry: Netherlands.