Now is the best time to book with Cunard's Spring Savings Event! Book your cruise by May 30, 2019 and receive up to 20% off cruise fares, free drinks package in Grill Suites (on 7 nights or longer), and Past guests booked in a Grill Suite will receive free gratuities.

Extra Bonus: Book Between March 27 – April 3 and also receive: Reduced Deposit and an additional up to $300 OBC per stateroom! 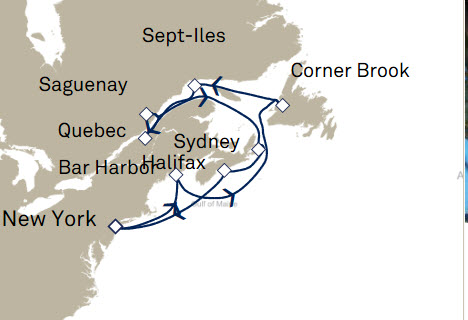 Receive Special Savings, up to $300 Onboard Credit, Reduced Deposit & More!

There’s a sense of natural paradise around Bar Harbor. In fact, it was once named Eden in honor of an early settler – Sir Richard Eden. It’s one of the most enchanting places to visit in New England.

Surveyed by Captain James Cook in 1767, Corner Brook is an island on the west coast of Newfoundland, separating the St. Lawrence River from the Atlantic Ocean to form the stunning Gulf of St. Lawrence.

Sailing into Quebec City you arrive at the oldest inland port in Canada, just minutes from the city center. As you head inland to explore the Old Town, you begin to sense a unique history and romance.

A star-shaped fortress welcomes you to the fascinating city of Halifax. Here you can stand beside the visionary Sir Samuel Cunard himself, or rather the bronze statue that presides over his hometown waterfront.

As it flows into the St. Lawrence River, the Saguenay River winds through a majestic fjord to reveal a host of picturesque villages. Natural beauty surrounds Saguenay Harbor, this vibrant conurbation.

Queen Mary 2 is a remarkable flagship, and her style and elegance are legendary. Above all, it‘s the space she offers and the luxury for you to do as little or as much as you wish which set her apart.

With time at sea the choice, as always with Cunard, is yours. There is as much or as little to do as you please, with more possibilities than you have time to discover.

When evening falls, the curtain rises. Our cast of talented performers is ready to delight you. Every evening during your cruise promises a stellar array of entertainment choices. So, whether you’re in the mood for music, dance performances or even magic shows, prepare to settle into your seat. Watch the resident Royal Court Singers & Dancers stage dazzling Broadway style productions or abridged Shakespeare performances. We’ve also hand-picked a talented line-up of vocalists and instrumentalists, aerial performers and illusionists, stand-up comedians, and variety entertainers.

Your table is reserved for breakfast, lunch and dinner in one of the sophisticated main restaurants aboard. Each is the home of deliciously imaginative menus, exceptional wines and impeccable service. This evening you may start with such delicacies as Salmon Gravlax with Poached Quail’s Egg or a Croquette of Suckling Pig. For your entrée, you might be in the mood for Dover Sole Meunière or a Chateaubriand, perhaps rounded off with a rich Bitter Chocolate Soufflé or a lighter Mango Panna Cotta.

If anything perfectly encapsulates Cunard’s service and sense of occasion, it is our prized daily ritual: Afternoon Tea served by white-gloved waiters from 3:30 to 4:30 pm every day in the Queens Room. Indulgent finger sandwiches, scones, and pastries accompany Twinings fine leaf teas as the orchestra provides a melodic backdrop. Our Grill guests may also retreat to the more intimate Princess Grill restaurant, while a more casual interpretation awaits in the Lido or King’s Court.

*Prices are per person based on double occupancy, availability, subject to change without notice and capacity controlled. Promotion is for the first two passengers in the same cabin. Taxes, fees and port expenses are additional at approximately $322.62 per person. Fares for other cabin categories are available upon request. Savings varies by category and sailing and is reflected in the advertised price.