Complement calls on grand cities such as Florence, Rome and Athens with the delights of island hopping through some of the most enchanting isles of Italy, Greece and Spain.

Plus receive complimentary gratuities when you book with Cruise & Travel Experts! 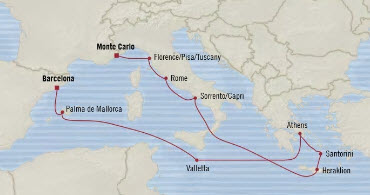 Look up to the sky through the largest unsupported dome in the world at the 11th-century Pantheon in Rome. Don’t miss the fascinating Heraklion Archaeological Museum, one of the most notable museums in Europe. From Santorini’s Monastery of Profitis Ilias, take in panoramic views of one of the most beautiful islands in the world. Climb the hill to the Acropolis of Athens to see the legendary Parthenon, an ancient architectural masterpiece built to honor the goddess Athena.

Marina blends sophistication with a contemporary flair to create a casually elegant ambiance. From the sparkling Lalique Grand Staircase to the stunning Owner’s Suites furnished in Ralph Lauren Home, designer touches are everywhere, highlighting the finest residential design and furnishings. More than anything, Marina personifies the Oceania Cruises experience.

*Prices are per person based on double occupancy, availability and subject to change without notice. Free amenities and pricing may change on April 1, 2019. The number of FREE shore excursions varies based on the sailing length. Free Beverage Package is house select (unlimited beer and wine with lunch and dinner). FREE Shipboard Credit varies based on sailing length. Roundtrip airfare has restrictions. Promotion is subject to change without notice and is capacity controlled. Other restrictions may apply.