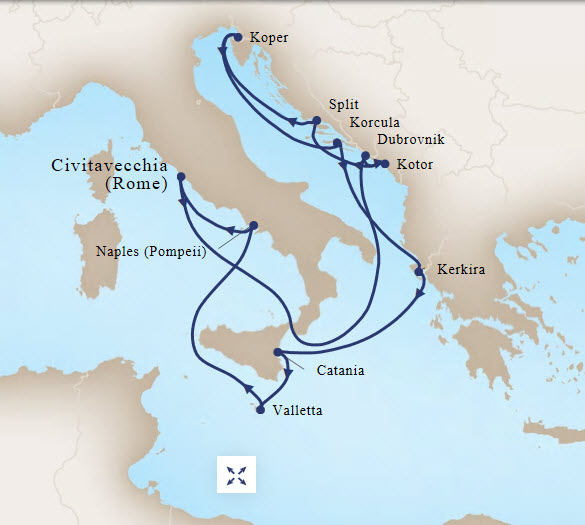 Receive $50 Onboard Credit and Complimentary Bottle of Sparkling Wine per Stateroom on us!

All of Holland America Line’s cruise itineraries offer just the right balance of action-packed days in port with relaxing days at sea, plus extended hours and overnight stays in select cities.  Whether you’re making your maiden voyage in the Mediterranean and want to see its more iconic sights or you’ve traveled here before and are hoping to experience some of its seldom-visited destinations, Holland America Line has the Mediterranean cruise vacation you’ve been waiting for.  Read more about some highlighted ports below:

Rome, Italy:
Rome is both a modern bustling city and an ancient open-air museum. You can walk in the footsteps of emperors, have coffee in Renaissance piazzas and see contemporary art all in one afternoon. Your sightseeing time in Rome begins at the nearby port of Civitavecchia, a seaside town with roots that stretch back to the Etruscan era.

Dubrovnik, Croatia:
On the southern end of Croatia’s Adriatic coast, Dubrovnik staked its claim to glory during the 450 years it existed as the independent Ragusan Republic, shoulder to shoulder with mighty forces like Venice and the Ottoman Empire. Once a renowned seafaring, shipbuilding and trading center, today it’s an enchanting tourist destination. Dubrovnik seduces sightseeing visitors with its polished (and very clean!) limestone streets, theatrical architecture, charming café, welcoming restaurants and distinctive shops along scenic side streets.

Kotor, Montenegro:
Cruising into the Bay of Kotor, you’ll be wowed by the dramatic beauty of this coastal Montenegrin town. Dreamy seafront villages are set to a backdrop of mountains plummeting into the Adriatic Sea, while the stone labyrinth of the Old Town is filled with medieval architecture and historic monuments – as well as the narrowest street in the world.

Corfu, Greece:
Corfu is the pearl of the Ionian Sea, attracting royalty from across Europe in the 19th century, and modern celebrities from all over the world since. As well as being undeniably Greek, the culture and food also show a clear nod towards nearby Italy, particularly Venice, whose fortresses dot the island.

Valetta, Malta:
The ancient city of Valletta is teeming with historic monuments, churches and gardens. At just one-third of a square mile in area, Europe’s southernmost capital is one of the easiest to explore on foot. As Malta lies just 50 miles south of Sicily, Italian influences dominate the cuisine and culture.

Prices are per person based on double occupancy, availability, and subject to change without notice. Taxes, fees and port expenses are additional at approximately $115 per person. Other restrictions may apply. Ships registry: Netherlands