Immerse yourself in the dramatically diverse Canary Islands with three coveted calls and enjoy explorations of equally tempting ports such as bohemian Granada, exotic Tangier and even soulful Lisbon during an overnight stay. 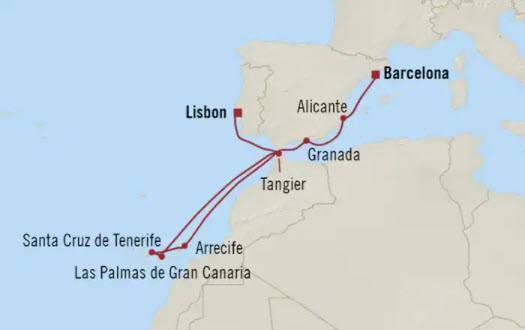 Receive Free Airfare and Internet Plus Choice of Free Beverage Package, or 6 Free Shore Excursions or $600 Onboard Credit. PLUS receive $100 per stateroom shipboard credit for veranda staterooms and above on select sailings when booked by October 27, 2021.

From ancient ruins and atmospheric old quarters to thriving food scenes and sun-drenched beaches, Oceania Cruises Mediterranean cruises offer the perfect combination of old-world beauty and modern charisma. Top sights such as the Vatican Museums in Rome and La Sagrada Família in Barcelona are easily at hand.

Lying on Spain’s radiant Costa Blanca, Alicante exudes a rare beauty. Pristine beaches like San Juan hug the shoreline.  Stop for a glass of refreshing sangria in the Old Quarter. Soak up the sun on one of the numerous exquisite beaches lining the Mediterranean haven of Almeria.  Marvel at the sumptuous palaces, lush gardens and imposing citadels that are the Alhambra in Granada. This UNESCO World Heritage Site is one of the most famous legacies of Moorish rule in Spain. Meander the narrow cobblestone streets of nearby Albaicín, the ancient Arabic quarter, or see a flamenco performance in the whitewashed caves of Sacromonte, originally settled by gypsies.

Soft breezes caress this small volcanic island of Arreceife, just 79 miles off the west coast of Africa. A land of contrasts: you can explore some of the world’s most spectacular caves in the morning and relax on a white sand beach in the afternoon. Next up is Tenerife, the largest of the Canary Islands. While in port, you’ll notice the Auditorium of Tenerife, an amazing, organic structure that instantly became an icon when completed in 2003. Another modern landmark is the Oscar Domínguez Institute, a contemporary art gallery named after the 20th century surrealist.

The capital of the island, Las Palmas de Gran Canaria is a historic and culturally rich city set amidst the splendid scenery of two sparkling bays. Visit museums, historical sites and wondrous monuments on a stroll through the centuries-old Vegueta quarter. See exotic flora and amazing vistas while hiking the island, and then relax on one of the four resplendent beaches or meander the energetic streets of Parque Santa Catalina. Explore the Mendoubia Gardens in Tangier, which contain a fascinating banyan tree that is more than 800 years old. Or experience a more traditional Morocco in Tetouan, a mountain city of grace and culture and the location of the beautiful white royal palace. The Caves of Hercules are nine miles west of Tangier in the Cap Spartel area; it is a place of great beauty and archaeological significance.

Finally end your voyage in Lisbon, Portugal and visit the ornate Belem Tower and Jeronimos Monastery and stroll the narrow, winding streets of the charming Alfama district. Enjoy marvelous old Sintra, a royal country retreat, and Cascais, a beautiful seaside resort. Explore medieval Obidos or make a pilgrimage to Fatima, where the Virgin Mary appeared repeatedly to three shepherd children in 1917.

A Marvel in the Making

A marvel in the making, Vista will deliver The Finest Cuisine at Sea®, exceptional personalized service with two staff members for every three guests, a warm and welcoming ambiance as a result of the ship’s captivating residential furnishings and introduce several unique firsts for the brand in the realms of dining and guest experiences. Vista’s best-in-class culinary experiences and next-generation Owner’s Suites will be revealed in the coming weeks, with her inaugural voyages open for sale now.

Vista is your world from a new perspective and honors our passion for serving The Finest Cuisine at Sea® with imaginative new dining concepts and the debut of new epicurean delights. Be among the first to experience Ember, the newest addition to the Oceania Cruises family of restaurants, and Aquamar, Kitchen, offering an array of indulgent, wellness-inspired dishes. Enjoy unforgettable dining experiences at treasured and iconic dining venues that have been elevated to new heights, from the refined elegance of The Grand Dining Room to the ultimate steakhouse experience at Polo Grill. Join us as we embark on the next chapter of Oceania Cruises’ culinary story.

Vista sets new standards for comfort and residential-style luxury with all-veranda accommodations. All staterooms and suites feature beautifully appointed bathrooms with oversized rainforest showers, large vanities and copious storage space. Penthouse, Oceania and Vista Suites are ultra-spacious and true seagoing residences with an abundance of living and dining space for entertaining or simply relaxing. In a first for the brand, Vista will feature a new category of Concierge Level Veranda Staterooms dedicated to solo travelers.

Bathed in soothing tones and detailed with multiple layers of luxurious furnishings, accents and artwork, each stateroom and suite is a welcoming home away from home.

Prices are per person based on double occupancy, availability and subject to change without notice. Above cruise fare in in US dollars and valid for US and Canada residents only. Special shipboard credit offer is based on double occupancy and for any sailings through April 30, 2023. OLife Choice offer fares expire on 12/31/21 and are subject to availability. OLife amenities are based on double occupancy and subject to change. All fares include government fees and taxes. Airfare” does not include ground transfers, and offer applies to coach, roundtrip flights only from the following airports: ATL, BOS, CLT, DCA, DEN, DFW, DTW, EWR, IAH, IAD, JFK, LAX, LGA, MCO, MDW, MIA, ORD, PHL, PHX, SAN, SAV, SEA, SFO, TPA, YOW, YUL, YVR, YYZ. Oceania Cruises reserves the right to assign gateways based on availability for JFK, LGA and MIA. Gateways are subject to change at any time. Free Roundtrip Airport Transfer offer is only available when OLife Choice Airfare is purchased through Oceania Cruises. Roundtrip Airport Transfer is included only for the above gateways. Airfare is available from all other U.S. and Canadian gateways for an additional charge. Other restrictions may apply. Ship’s registry: Marshall Islands